Every Ride, Every Time

Will The Real Wing Man Please Stand Up?

Back in May, I wrote this post explaining that Salem never raced and is not the Wing Man listed with the Jockey Club. He isn't tattooed, he never raced, and he never spent time at the track. Well, that post recently got quite an interesting comment:

Wing Man (the one with 46 starts) update: We acquired Wing Man after he retired from the track because of his exceptional eventing pedigree. He has been chilling out learning to not be a race horse and occasionally packs my wife around our trails. We will hopefully start breeding him soon. He has a fabulous temperament and is definitely still sound. Sounds like your Wingman is doing great as well. 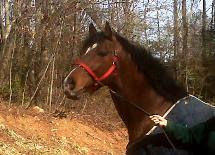 The "real" Wing Man was bought by Wit's End Eventing. You can see his page here (where I got the  pics). I'm glad that he found a good home after his tough racing career. Now he will get to spend his days making lots of eventing babies, a career I'm sure he will enjoy. ;-)


Thanks for the update and clarification, Wit's End! 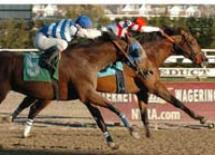 While Salem was already fully outfitted in anti-bug gear and coated in layers of fly spray, he was still being eaten alive. So, I had to suck it up and buy him a fly sheet with a belly band and neck cover, plus a fly mask that would cover his ears and nose. He is now ready for bee-keeping, nuclear warfare, and life in the swamp of Miami. 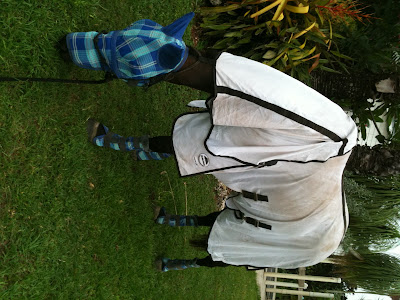 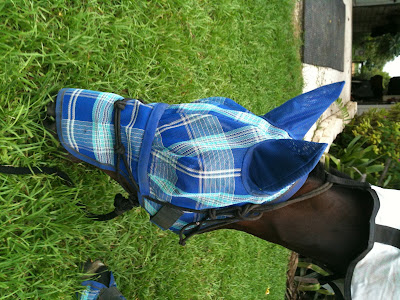 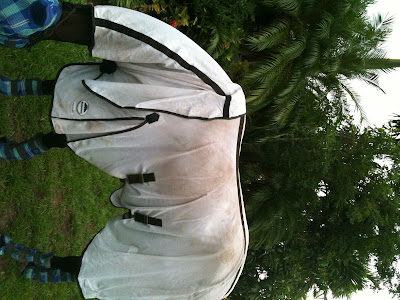 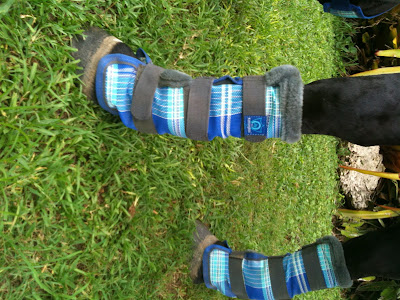 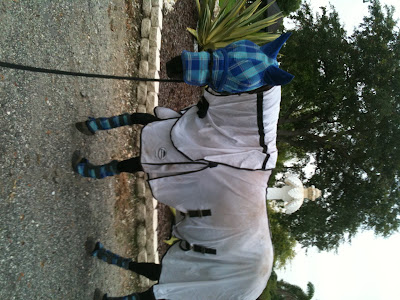 Try and get me now, f*ckers!
I'm not sure if I'm sold on this fly sheet. While I love Weatherbeetas and it does fit him well, the material is so thin and light that the neck cover falls and flops around. It does have a loop at the top to attach to a fly mask (if it doesn't have ears or has a special neck cover loop) or a halter; but Salem's fly mask has nowhere to hook the loop, and he doesn't wear a halter unless I'm messing with him. I originally wanted a Schneider's bellyband fly sheet, but they were out of stock in size 82. I guess we'll just have to make this sheet work. (Anyone know how to add some kind of loop thing-y to a fly mask? I really don't want to cut a hole in it.) 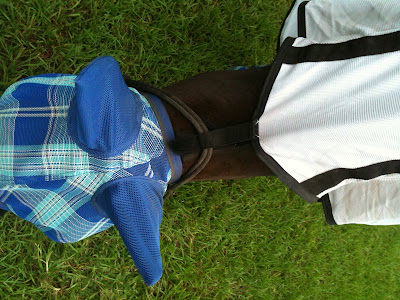 On the plus side, it does seem to make Salem much more comfortable. And, even though he rolls a ton, he was still very clean tonight when I took off the sheet. 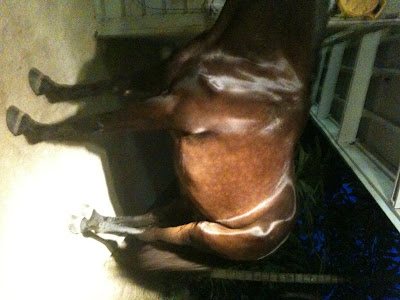 ﻿
And this is pre-grooming -- not bad!
﻿Do any of you use fly sheets? If so, what brands? What do you like/dislike about them?
Posted by Frizzle at 11:56 PM 7 comments:

Arthropoda: Worst phylum in the history of EVER! Ok, so the crustacea critters don't bother me, but the cheliceratas and myriapodas can totally suck it. They need to die. (PSA: Don't take zoology; you will think it will be super interesting and involve fun things like petting baby giraffes, but in reality you will learn everything you never wanted to know about worms and other gross/dumb/boring creatures and the only thing you will get to "pet" will be a huge dead fish in a giant bucket of dizziness/headache-inducing formaldehyde.)

It wouldn't be so bad if they would just stay away from me. But I live in the swamp, where arthropods outnumber humans 5 million to 1. And apparently I emit not only a high-pitched whine that only animals in distress can hear, but also another sound that says, "Hey, arthropods, come over here!"

And poor thin-skinned TB Salem is the same; while his QH/draft-cross neighbor has nary a fly on her, he is getting bitten repeatedly, despite his fly mask/boots/sheet. A few times, it's gotten to the point that he's been kicking his belly, squealing, and rearing because the mosquitoes are biting him relentlessly. I'll stand there and just smack his belly & neck (really the only 2 uncovered places on him), killing mosquito after mosquito, and he'll just stand there like, "Thank you!" 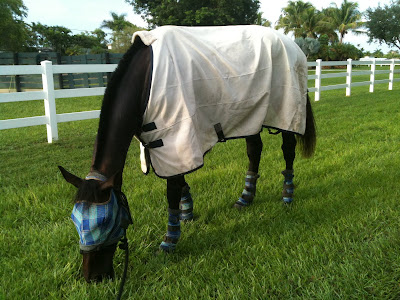 Old Anti-Fly Outfit (that brand-new fly sheet was
very generously donated by a fellow boarder -- how
sweet is that?!)
I think we both need beekeepers' outfits. Of course, Salem is the priority and his has already been ordered, along with three bottles of fly spray (which will last me all of, oh, two weeks).

Then there's Aragog. Ya know, Aragog the giant spider from Harry Potter? Well, he lives in my feed room. 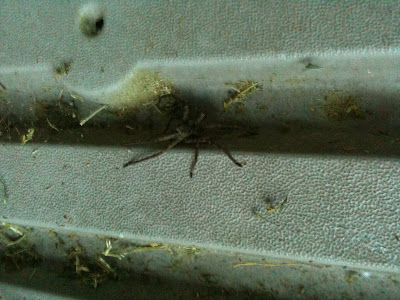 I'm sorry, but that is like half a step down from a tarantula. *shiver* Just typing that word makes me cringe. And not only is he a spider-on-steroids, he is a jumping spider-on-steroids. And ya know what's worse than walking into the feed room and seeing him? Walking into the feed room and not seeing him. Because then you just know that he's hiding, probably somewhere above your head, and he's planning to ambush you and get revenge for all of the spiders that you have mercilessly smooshed in your lifetime.

OK, so let's review the evidence of the arthropods' attacks. Over the last few weeks:

~ # of times I've gotten into the car after being @ the barn, started driving away, felt something move in my hair, felt my head, realized there was some kind of giant bug in my hair, and began frantically clawing at my hair in an attempt to remove said bug, all while shrieking/squealing/swerving around erratically and nearly driving off the road: 2

~ # of mosquito bites that I have: Innumerous. Seriously. I've been wearing long sleeves whenever I'm out in public because I look like I have chicken pox/leprosy/flesh-eating bacteria skin rot of death. 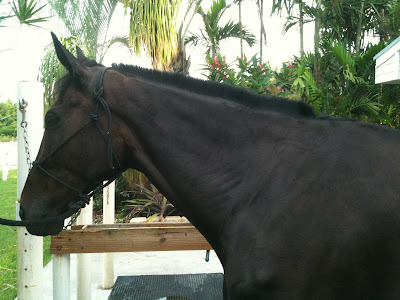 Yay! Salem has finally grown a respectable mohawk! Granted, it's nowhere near Fjord proportions, but I think it's quite flattering. It certainly makes his neck look fatter (and I <3 a nice, thick, warmblood-stallion-cut-late kinda neck!). Yes, the part near his withers has been smooshed a bit by his fly sheet...but, really, what are ya gonna do? We'll take it! 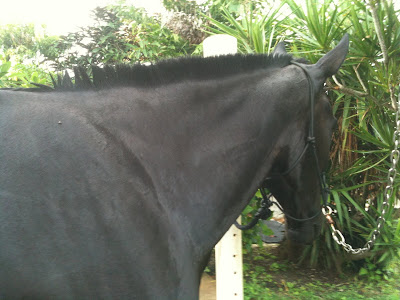 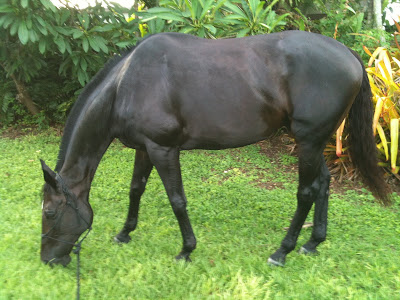 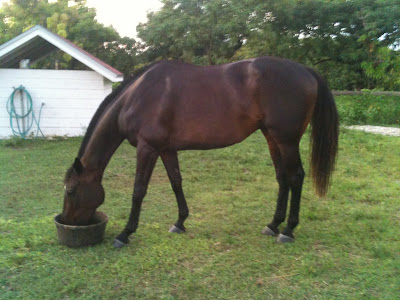 Had to throw in a pic of Salem dry, to show his lovely (sun-bleached) coat 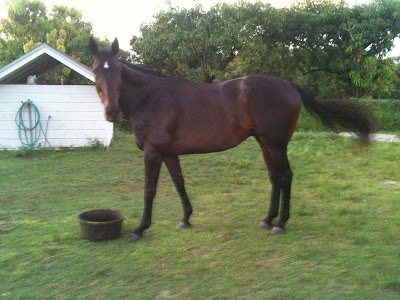 Like my new look, guys?
﻿So, now that Salem is rockin' his 'hawk, I need some mohawk maintenance tips from you guys. Do you clip it? Cut it with scissors? Take a weed whacker to it? I am woefully inept when it comes to hair styling (it took me over 20 years to figure out how to tame my own Mufasa fro), so I need all the help I can get. *grabby hands* Knowledge, please!
Posted by Frizzle at 1:10 AM 3 comments:

For My Next Trick, I Will Escape From This Padlocked Straitjacket

Yes, my horse has decided to become The Great Escape Artist. A few weeks ago, the barn worker Alfonso informed me that Salem had busted out of his stall during the day; no biggie since his barn is surrounded by a paddock.


At first, Alfonso just allowed Salem to stay out, but unfortunately he and one of the horses in the adjoining paddock played a bit too boisterously and somehow managed to break the water trough. So, Salem was banished back to his stall, which is now equiped with a Salem-proof "lock." He goes back out after all the other horses are brought in from turn-out, which I think is a nice compromise.

﻿So, when Sunday afternoon I got a voice-mail from a fellow boarder that started out, "Hey, Meghann, just wanted to let you know that your horse was out," I wasn't at all concerned. But then it continued, "I managed to get him corralled into his paddock and then put him back in his stall," and my heart hit the floor. ?!?!?!
I immediately called Donna back and asked for the full scoop. Apparently, she had been leading a horse out to turn-out when she saw a black streak out of the corner of her eye. At first, she thought it was the old laminitic black mare Tiffany; but, nope, it was Salem. Out in the front yard. Of the property that, yes, has a lovely perimeter fence, but whose front gate is pretty much always open.
So, I think we have established the fact that Salem has a guardian angel. I am beyond thankful that he didn't get out on the road or injure himself in any way. In fact, there wasn't a single scratch on his dappled bay hide. How lucky am I?!! I still have no idea how he got out, as he can NOT open the paddock gate. My guess is that someone forgot to latch it. Either way, I am taking no chances; I brought out another snap-y/close-y thing for the gate, so it will be double-locked. Hopefully, this is the end of Salem's Houdini escapades and I won't have to build him a freaking velociraptor enclosure!
Posted by Frizzle at 12:32 AM 6 comments:

In May, I treated Salem with generic omeprazole for possible ulcers/hind-gut acidosis. Of course, I wanted to do as much as I could to improve his gut health, so I've been keeping a good quality grass/alfalfa mix hay in front of him at all times, feed him a high-fiber grain that contains probiotics, and also ﻿started him on a daily "Tummy Tonic" to help cut down on the acid in his stomach and heal any present ulcers. Here's what's in it:
2 quarts alfalfa pellets (helps reduce stomach acid)
~6 quarts water
1/2 cup aloe vera juice (read about the many benefits here)
I leave the mixture to soak for an hour or so and it fluffs up to a nice soft mush. I then add:
1 cup pumpkin seeds (which are supposedly good for healing, according to this article)

The following can also be added for further GI health benefits:
Yogurt or pre/probiotic supplement
Papaya (or Stomach Soother)
L-glutamine
Oat flour (this and l-glutamine are the main ingredients of Succeed, a very expensive digestive supplement)
Slippery Elm
Spearmint/Peppermint
This is Salem's late-night snack and he loves it! He also gets some aloe vera juice in his evening meal﻿; unfortunately, he doesn't get any in his breakfast because the aloe vera juice has to be refrigerated once opened. Because of this, a lot of people use U-Gard, which has aloe vera juice in it but is more convenient to feed.
For those of you with ulcer-prone horses, what supplements/strategies do you use to manage your horse's digestive health?
Posted by Frizzle at 9:50 PM 10 comments: