It's hard to believe, but today was the official one year anniversary of my boy coming home. 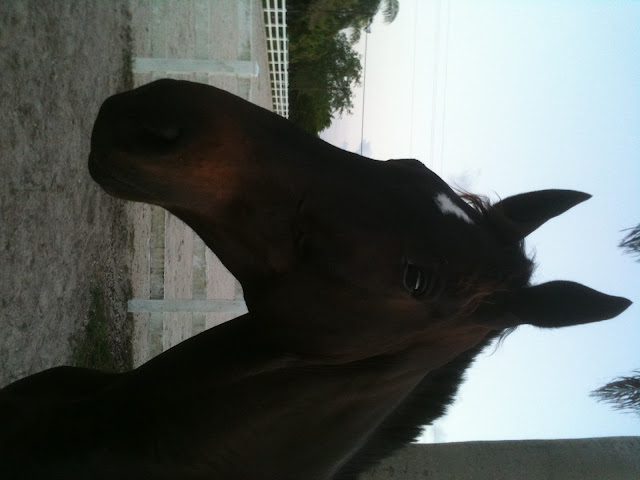 Here's to several more decades together, buddy!
Posted by Frizzle at 11:56 PM 6 comments:

Of course, once I started writing a post about how great Salem's hooves are, the universe decided that it needed to kick me down a couple of notches and throw some salt up in my game. I got one of "those" calls that we all dread--"Hey, Meghann, just wanted to let you know that Salem is off on the right front."

Luckily, I was already on my way to the barn, and my fellow boarder said that she had checked Salem's hooves for any possible stones, etc., combed his paddock for sharp objects (she had a little pile of spiky plastic things and shards of PVC fencing set aside outside the fence), and sprayed Salem down with fly spray to get him to stop stomping at flies. She said there was no heat or swelling in any of his legs, but that he was lame even at the walk. Immediately, I thought "Abscess."

After a thorough once-over, I found that Salem was actually off in the left front, but all signs were still pointing to abscess and/or solar bruise. Luckily, I hoard first aid supplies and had a whole stash of anti-abscess weaponry at the ready. The first night, I completely over-reacted--I cold-hosed his legs for 20 minutes, packed both front hooves with Magic Cushion, rubbed him down with liniment, wrapped his front legs in standing wraps, and strapped his Cavallo Simple Boots (very generously donated by Candy a few months before) onto his hooves.

The next day, Salem looked no better, so I decided it was definitely an abscess (my theory was that he would have felt better from the Magic Cushion if it had just been a bruise) and changed my daily game plan to the following: 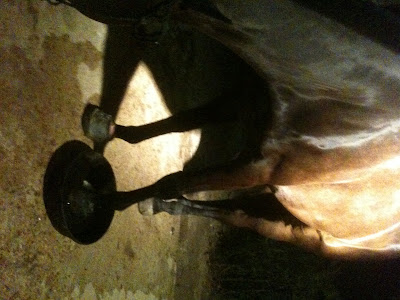 Someone was not a fan of hoof soaks, but he eventually
learned to deal with them (baby carrots certainly helped!)

Several people were surprised that I didn't call the vet out right away, but I was 99% sure I was dealing with an abscess. Also, I am not a fan of allowing vets to carve abscesses out, so I figured it would be a waste of money to pay the vet to tell me to keep doing what I was already doing.

After a few days, Salem developed a very slight poofy-ness in the lower leg, which sent me into a bit of a tailspin. Luckily, about 15 minutes of internet research later, my pulse returned to normal--it's apparently quite normal for a horse with an abscess to develop some swelling in the affected leg. Some horses' legs  even swell so badly that it's first thought they have a broken bone, when in fact it's just an abscess. 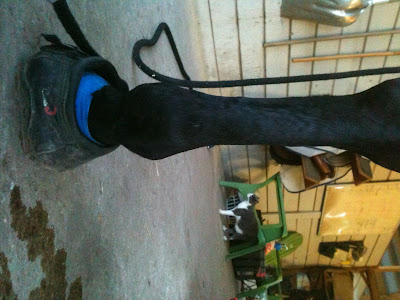 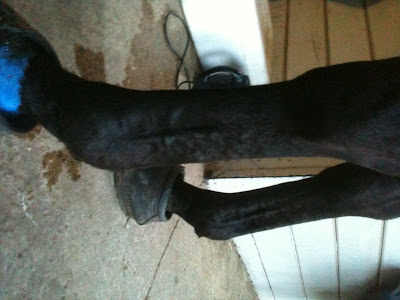 So, after a healthy application of DMSO, it was back into the standing wraps for Salem. 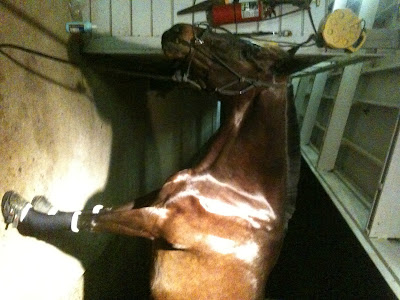 Nine days into his treatment, Salem's abscess finally blew out of his coronet. I wasn't surprised, as his sole is so cement-tough that there was no way the abscess could get through it. The coronet was the path of least resistance, and I was very glad to see the abscess come out there rather than through the sole, since it's much easier to keep clean. 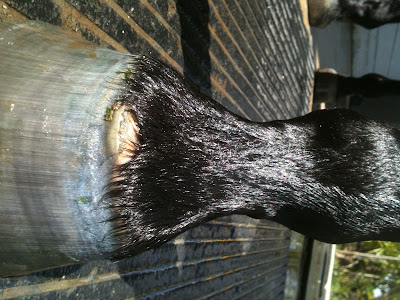 Soon after it blew 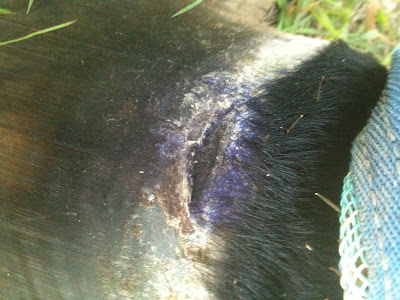 A week later, well on its way to healing

You would think this would be the end of the tale, but unfortunately there's more. There's always more with horses! While Salem was totally sound and comfortable at the walk after the abscess blew, he was still a bit off at the trot. I figured either he had an as-yet-undiscovered bruise that needed to resolve and/or there was still more abscess in the hoof capsule. A few swipes with the rasp revealed some blood at the toe, which Candy confirmed is indeed more abscess working its way out. 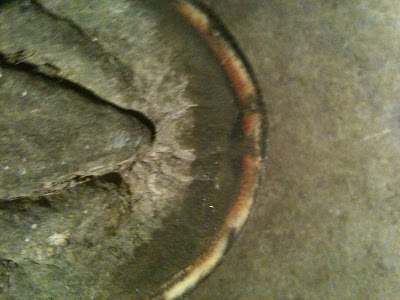 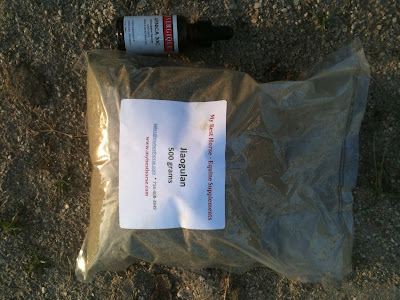 Oral Arnica Montana to resolve bruising, and Jiaogulan to increase circulation to the hooves and help clear out any remaining abscess material. Total cost, including shipping: $31.

Luckily, even though Salem is not completely sound (at least not when I try to longe him), he hasn't let it cramp his style in the least. He's been careening around his paddock in his spooky prance-trot and galloping back and forth snorting like a T-Rex, so I'm guessing he doesn't feel all that bad. Actually, as long as I'm not asking him to, you know, work, he looks sound as a dollar. I guess he's just enjoying the life of leisure. 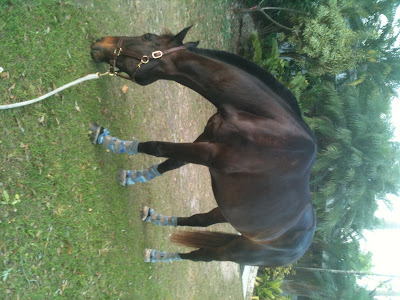