Will Yawn for Food

An intelligent horse can be a blessing and a curse -- they pick things up quickly, but sometimes you don't even realize that you have (accidentally) taught them something by rewarding a certain behavior. Fortunately, most of the things Salem has taught himself/me have been either harmless or helpful; for example, he taught himself to halt on the longe line when I square up to him. He taught himself to turn his head away from me in order to get a treat.

And he taught himself that yawning = meal.

Ever since he came down here last April, I've been doing a bit of liberty work with Salem. Nothing fancy, just some basic w/t/c, halt, reverse, etc. at liberty in the arena. Unfortunately, I usually get to the barn when it's dark out these days, so our liberty sessions have suffered quite a bit; but the liberty work we do every day involves Salem standing patiently while I bring his grain out, and standing still until I give him the signal that he can walk to his feed tub and eat. And somewhere along the line, Salem must have yawned while he was standing there, and I inadvertently rewarded that behavior and gave him the "release" signal. So now he stands there letting out these dramatic, eye-rolling, tongue-wagging yawns while he waits for his food. You might have also noticed him turning his head away from me (his "this-is-what-I-do-to-get-a-treat" trick) and then going back to yawning -- you can almost see his little brain working, saying, "OK, which trick does she want me to do? I will run through them until I get it right."

And Now For Something Completely Different 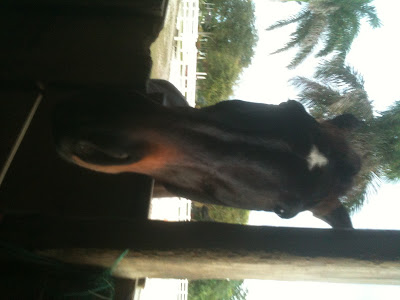 Hey! This is MY blog!

Yes, it has been a shockingly long time since my poor steed has been featured on his own blog. He reminds me frequently that his public requests, nay (neigh?) demands an update on His Royal Highness. Unfortunately, not much is going on in the world of Salem right now--his days are full of eating, wandering around his paddock, eating some more, harassing the horses in the neighboring paddocks, grooming, hand walks around the neighborhood, and occasionally *gasp* a bit of longeing or liberty work. It's a hard knock life. 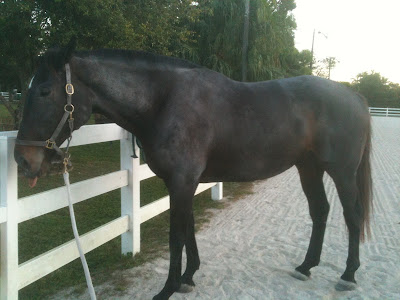 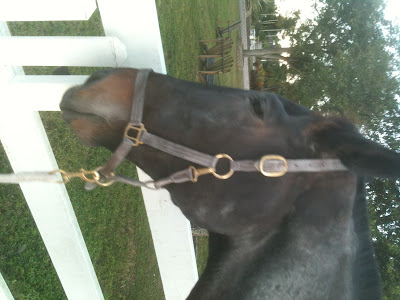 Occasionally, his afternoon nap is interrupted by a visit from Candy. By now, she has transformed Salem's hooves back into the gorgeous, balanced, tough-as-cement super hooves that he had back in April of 2010. It took a lot of time and effort, but it has made a huge difference in his soundness. 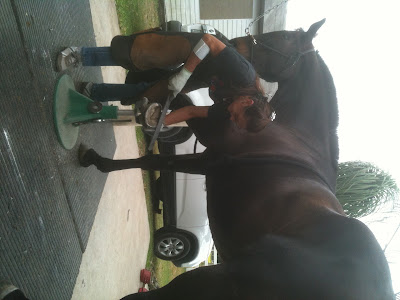 I swear Salem is not part-Clydesdale. Candy is just a tiny little
Polly Pocket of a hoof trimmer (and Salem is a very naughty
little trimmer's-butt-nibbler)

So, here is the one interesting thing that has happened to us lately: Back in January, one of my fellow borders had her trainer Heath come down from Kentucky to judge a horse show, and she had him stay an extra day to ride a few horses and teach some lessons at our barn. I had hoped that I would have Salem sound as a whistle and back in work so we could have a lesson with him, but unfortunately I have yet to find a money tree. But I figured, hey, why not at least get a good groundwork session in.

I think Heath might have gotten the impression we were a bit more "special" remedial than we are, but I do think our lesson was very productive; I got some good insight and pointers. Heath worked on Salem's tendency to travel inverted, with his head to the outside and his body bent in completely the wrong direction. (I'm not sure why he does this, as it only showed up after he came down here from Chicago--??) He noted that Salem is just very weak and needs to work properly in order to develop his muscles and balance.

Of particular interest to me was his comment that Salem is extremely weak in his right hind--he didn't say "off," just "weak." That got me thinking: Is Salem over his original injury, whatever that injury might be? Were all those months of hoof rehab and hand-walking and Tincture of Time and anti-inflammatory supplements really all he needed? Do I now just need to build his strength back up? It would be *amazing* but with my luck I am not going to get my hopes up. It seems too good to be true.

Luckily, one of my fellow boarders caught a few minutes of our lesson on video:

Anyone notice that Salem is a horse of a different color? His left side is an orange-y, bleached-out, dull brown and his right side is a slick, dark chocolate-y brown.Why? Well, apparently there is something of great interest in the nursery next door. Because 98% of the time, Salem stands facing west, staring at the invisible Something Interesting that resides in the nursery. His left side catches the southern rays, while his right side remains in the shade. Result--multicolor pony.

So, there you have it, Salem fans. My boy is still fat as a tick and living like a prince. It might not make for exciting blog posts, but I do think he's content with his current life of leisure.