Not Pathological, But Unique Nonetheless

Lately, I've been posting lots of pics of very pathological hooves. So, today I'm going to flip the script a bit and focus on some more "normal" hooves--Salem's! It's been quite a while since I've taken pics of his hooves, let alone posted them, and I think it's important to periodically document them so I can see what's going on and compare them to older pics. 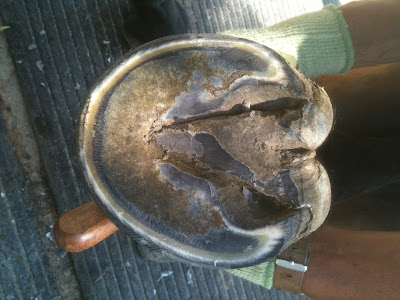 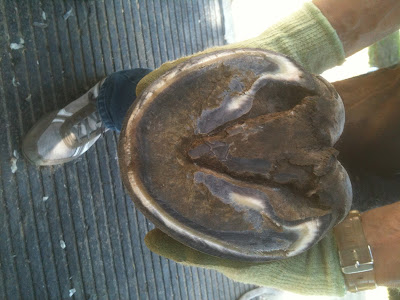 His rear hooves also have a whole lot going for them; but, while they're healthy and strong, they're a bit more...*ahem* unique. Particularly his right hind. 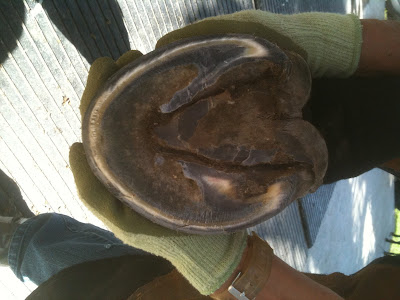 Yes, that hoof is a bit cattywompus--the frog is off-center, the medial side looks a bit squished, for lack of a better word, and the medial heel bulb is much smaller and less developed than the lateral heel bulb.

But, in all honesty, I'm not worried. Because Salem's whole back-end is a bit funky, and *this* is the hoof that works for him. There isn't a "cookie-cutter" trim that each hoof must fit into; in fact, the only measurements and mark-ups that Candy does are for a 30-degree hairline and a heel that is 1 1/8" from the coronet. That's it. The bars are kept trimmed and the walls rounded, and basically the rest is up to Salem. Keep in mind, too, that his right hind is where his mystery lameness/stiffness is, and hooves are a reflection of what's going on in the horse's body. That's the great thing about having a barefoot horse--everything will show up in the hooves, so it's a great barometer for the health of the rest of the horse's body. So, while this hoof looks less than perfect, it's functional and it works well for Salem. 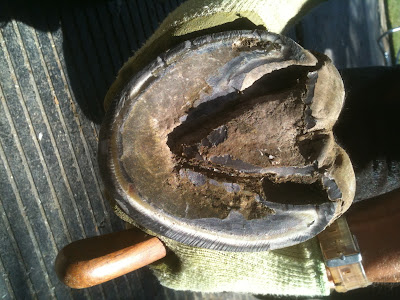 The left hind is certainly more "normal"-looking than the right hind, but it too is less well-balanced than the fronts. You can see that the frog is, again, slightly off-center. And the medial heel bulb is smaller and less robust than the lateral. (But check out that amazing concavity!!) I do think he either weights the lateral walls of his hinds more, or just wears them more because of the way he moves, because the medial walls are always a bit longer.

Yep, as with all things, Salem definitely has to be unique.
Posted by Frizzle at 3:46 PM 10 comments: