Barefoot. This one little world has caused quite a stir in the equestrian world. To some, it conjures up images of die-hard barefoot zealots who preach against the evil torture of horseshoes. To others, it represents hope, and is used as a desperate last-ditch effort to save the life of a beloved equine. The range of emotions this word inspires runs the gamut; a quick read-through of COTH barefoot forum posts contains everything from glowing praise to vitriolic criticism. Unfortunately, barefoot remains a widely misunderstood and complex subject, one that many horse owners dismiss simply because of the deeply-ingrained  tradition of horseshoes.
As most of you know, Salem came to me barefoot; in fact, he had been barefoot his whole life, except for a short stint in shoes during track training. However, he did not have a true "barefoot" trim. Instead, he had what is called a "pasture trim" -- essentially, the farrier trims the hoof exactly as s/he would before applying a shoe, and then leaves the foot bare. This trim removes much sole and frog material -- and since the hoof is not then propped up on shoes, it usually leads to tender-footedness. The trim also loads the hoof peripherally, meaning that the majority of the horse's weight is placed on the hoof walls. While the walls are indeed meant to support a small portion of the horse's weight, they were not designed to carry the majority of the load. Forcing them to do so leads to flaring, cracking, chipping, and increasingly flat feet. Exhibit A: 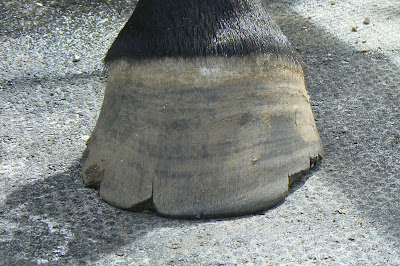 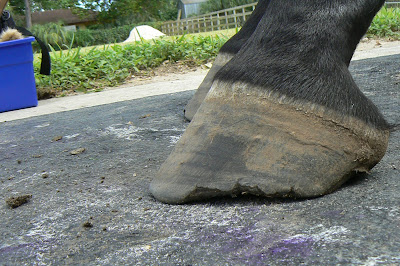 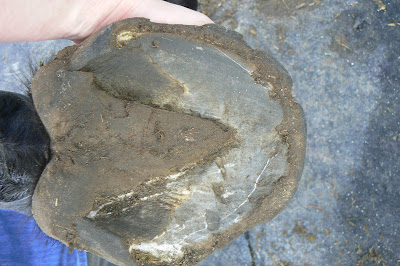 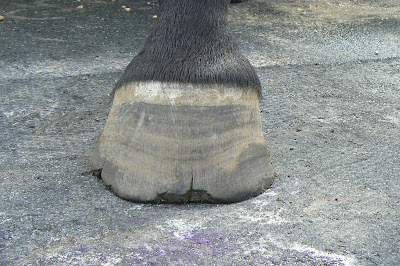 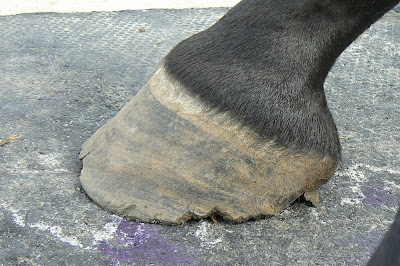 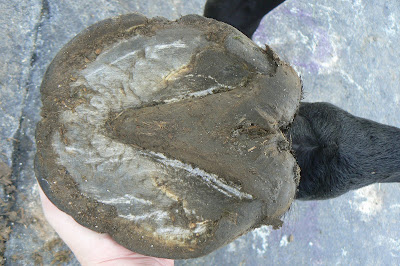 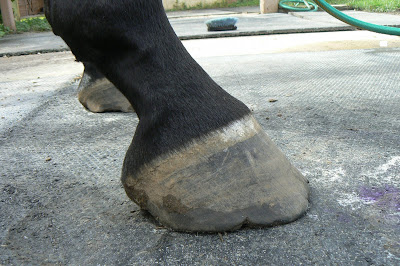 Peripheral loading is a negative situation for the hoof, because it severely interferes with blood flow inside the hoof. Bowker conducted experiments in velocity of blood flow in the hoof using Doppler Ultrasound. What he discovered is that harder surfaces made the blood flow faster, and when it did that, it never “perfused” the tissues. It was just like a rainstorm in the desert (and I’ve seen plenty of those!)—water gushes down in a flood, but never sinks into the ground. The faster the blood flow, the less blood made it to the tissues!


He also documented the effects of more extreme peripheral loading. With a shod hoof, blood flow actually came to a halt for a split second with every heartbeat, at the level of the horse’s fetlock. In a computer model that he developed with some engineers, he measured stresses on the coffin bone, and discovered that a peripheral load encouraged bone to be removed. A solar load encouraged bone to be laid down, or at least not removed.

Many horse owners give barefoot a try, but it oftentimes does not work because the horse is given a pasture trim, which leads to tenderfootedness, flares, chips, and cracks. Of course, the shoes are then put back on, as the owner believes that the horse simply "doesn't have the hooves to go barefoot."  It's a shame, because many (maybe not all) of those horses could most likely remain barefoot if they had been trimmed and transitioned properly.

So, how does a "natural" barefoot trim differ from a pasture trim? Well, I'm certainly no expert, but I have studied the subject enough to have cracked the tip of the information iceberg. Here are the basics:
- During a set-up trim (and possibly for a few trims afterward), some sole might need to be gradually trimmed back in order to remove "false sole" and get down to the live sole plane. After this, the sole will most likely not be trimmed, but allowed to form a thick, tough callus (usually develops to a thickness of 1/2 inch to 5/8 inch)
- The frog, except in rare cases, is not trimmed. The flaps that form might need to be cut back for sanitary purposes, but the rest of the frog is allowed to form a tough callus, like the sole
- The hoof walls are rounded in order to distribute weight correctly and to help with breakover. In the States, we call this a "bevel" or "mustang roll." In England, it is called "dressing" the hoof
- The hoof walls are not allowed to overgrow -- they are kept at or below 1/4 inch above the live sole plane
- The bars should not be removed; rather, they should be trimmed so they are slightly shorter than the hoof wall
- The toes are gradually shortened so that 1/3 of the hoof is in front of the apex of the  frog and 2/3 is behind it
- The weight of the horse is distributed over the wall, frog, bars, and sole, eliminating peripheral loading
These are just the very fundamental points to a natural barefoot trim, and I recommend that anyone seriously interested in the subject does further research. I will admit that keeping a horse barefoot takes a lot of time, effort, and knowledge, but I do believe that it's better for the horse. Here are some photographs of the same hooves shown earlier, after 3 "natural" barefoot trims: 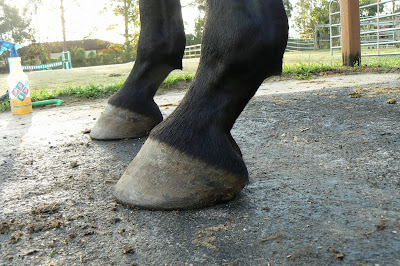 Salem's left front hoof, 4 weeks post-"natural" barefoot trim
(3rd NBT, still not at his "ideal" hoof, but getting there)
Note the rounded edge of the hoof wall,
called a "bevel" or "mustang roll" 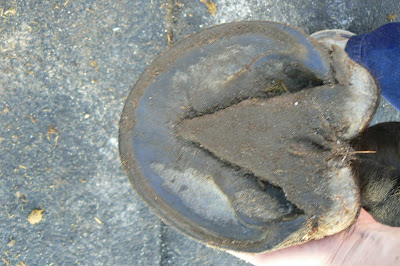 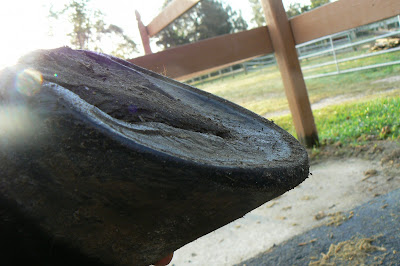 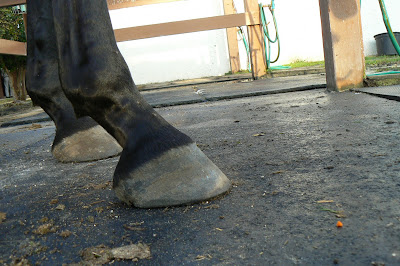 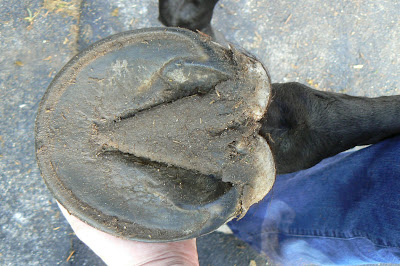 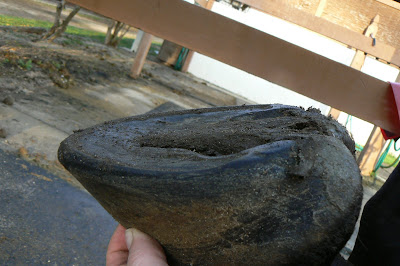 Note the elimination of all chips, cracks, and flares, plus the tight connection all the way around the hoof. Candy, Salem's trimmer, noted that he had the healthiest hooves of any horse she trims. This was due to 24/7 turn-out, a low-NSC diet, daily spraying with apple cider vinegar/water to eliminate fungus etc., weekly rasping to maintain the mustang roll, and trimming every 4-5 weeks. Of course, the biggest change was the type of trim he received -- as soon as he was switched from a trim that loaded his hooves peripherally to one that distributed his weight properly, his hooves showed immediate improvement.


For more information on barefoot, I highly recommend the following links:
http://www.barefoothorse.com/
http://www.thehorseshoof.com/Art_Bowker.html (links to two of Dr. Bowker's scientific papers, as well as his press release "Physiological Trimming for a Healthy Equine Foot," can be found at the bottom of the page)
http://www.hoofrehab.com/ (the How-To Article section is quite informative)
(ETA: I am not a proponent of the Strasser trim, as I feel it is far too aggressive and can do a great deal of damage to the horse. The Strasser method promotes carving concavity into the hoof, while the methods of The Oregon School of Natural Hoofcare, Pete Ramey, Jaime Jackson, etc. believe in allowing concavity to naturally develop.)
Posted by Frizzle at 7:19 PM

Izzy did really, really well barefoot right up until we moved to the new place. She's on road mix and the arena is sand, so last time I had her feet done, the trimmer barely took anything off and Izzy was sore within a week because the abrasive surface was wearing down her hoof faster than she was growing it back.

However, thanks to a year of barefoot trimming by a knowledgeable person, she has beautiful, healthy feet.

Very interesting and informative. It helps clarify in my mind the proper and improper ways to trim horses that are barefoot.

Bravo! I can't help but be annoyed when I see people that run into one ittybitty block and immediately through shoes on. I know I shouldn't but, well, I do. But as you know, I am already well on my way to being the super nutty horse girl what with all my 'natural'ness and all lol!
Great post though, and wonderful info!

Oops, wanted to add that my comment was not meant towards anyone, and I hope I don't annoy anyone. I am not there and do not truly know what the situation is when a horse makes the move to shoes!

Very nicely written.
Barefoot is SUCH a delicate subject amongst horse owners, isn't it. I get loads of advice and loads of contradicting info but I'm so thankful that I have a trimmer that I trust through and through and am trying to learn as much as possible! I know the suffering horse that is 'barefoot' with an incorrect trim..it's so sad to see. Time and education heals all for most.