A Good End To A Bad Week

Yes, the clouds have finally parted and let the sun break through (metaphorically -- it's actually rainy and gross right now). I have gradually regained Salem's sanity, thank goodness; and I have had no more tragedies. This was not my week, but the past few days have been brighter.

First and foremost, the Salem Ponykins -- where did I last leave off in our tale? I told you about his sanity "breaking" last weekend and the extraordinary acrobatics that it entailed. Unfortunately, Salem is sharp as a tack and, even though I did not get off right away when Salem misbehaved last Saturday, he still got it into his head that Naughtiness = Less Work. It took several days, lots of leg, and enough growling to intimidate a Rottweiler to show him that his shenanigans will get him nothing but more work. He gradually got less and less resistant and finally threw in the towel on Wednesday.

Friday, Heather rode Salem in the morning. I warned her that he was having a Greenie, Boundaries-Testing Week, so she needed to keep her guard up. Her exact words when I asked her how it went were, "Well, it ended well." Apparently, he had been very good at the trot (which is what I had fought for all week), but when asked to canter he went "leaping around the field." Poor Heather, she got a wild ride! But I know that she is a very determined and capable rider and she worked him through it with a bit of help from Elaine.

Saturday, Heather and I did a one-two tag team ride in the morning and he was a very good boy. He still had to throw in a little bit of naughtiness every now and then, but went very well overall. Since Heather was on first, she actually worked all of his kinks out. I got to just get on and have a nice quiet hack. It's nice to have someone else do all the hard stuff every once in a while!

That afternoon, I had to leave early because I had tickets for Cavalia -- yes, this is the second time that I've gone in the past three weeks, but it's very good! This time, I was in the eight row, as opposed to last time when I was literally in the last row. Needless to say, it was just as breathtaking and mesmerizing as the first time.

My absolute favorite part is the Grand Liberte', where Sylvia Zerbini comes on stage with her eight horses (a mix of white/grey Arab and Andalusion stallions/geldings). Zerbini has nothing but a dressage whip, and all of the horses are completely free and loose -- no halters, no nothing. She holds the attention of those eight horses far better than I can command the attention of one. The Grand Liberte' is indescribably beautiful -- the relationship that Zerbini has with those horses is touching and inspiring. She'll make a little circle with the dressage whip and four horses will spin one way and four will spin the other way. I've never seen anything like it. Zerbini is definitely one of my new horsey idols! 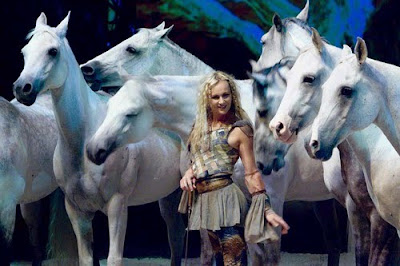 In other good news, Salem's lip is completely healed. In fact, Dr. F could have been a plastic surgeon because you would never know that he ever had any stitches. Yay! 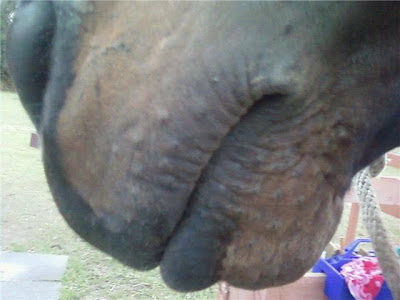 And last but not least, today Heather gave Jennie and me an hour-long flat lesson. For the most part, Salem was a very well-behaved little pony. We had some cantering "issues," where he would leap around like a gazelle, kick, buck, and crowhop. Really, it sounds worse than it was. We worked through it, and he eventually settled down and cantered quietly. He didn't spook once -- not at the horses in the pasture, the growling lawnmower next door, the 4-wheelers tearing down the street, the horses being longed in the arena, or the various sounds created by the brisk wind. We even got the right lead on the first try -- victory! :-) Overall, it was definitely the perfect, bright end to a very dark week.

Do you ever notice that the busier things are the better your horse behaves? I've had that happen with Izzy lately, and she and Salem seem to share some interesting traits. Quiet days are no bueno, but busy days are fine.

Reading your blog confirms that you are one of my heros.

Kissable lips!! and wtf, why isn't Cavalia coming to Michigan..or how did I miss it! Looks AMAZING!

Random Questions. Is Salem really 17 hh? WOW! He's a monster! Do you own him or does your friend Ruby? How does that work? (I was bored and decided to re-read some of your blog. I SHOULD be cleaning up dinner....key word: should.)

Denali,
Ruby owns Salem, but I treat him like he's my own. That's the way I've always done it, which I'm sure is one of the reasons she's so comfortable having him here with me. Ruby is in her late 50s, so it's my job to "ride the green" out of Salem. He's already been here for almost 5 months and I feel like we haven't made as much progress as I would like -- but that's the way horses are!
As far as how the situation works, Ruby pays for Salem's board, hoof trimming, and vet. I pay for all the extras (paddock stall, extra hay, treats, supplements, massages, etc.). Yeah, he's spoiled!
And, yep, he was advertised as 17 hands; I swear he's a shade under, but everyone else thinks he's a true 17h. Everyone is always saying, "He's so HUGE!" But, to me, he's just a regular sized horse. I've ridden 18 warmbloods, so it's pretty ho-hum for me.

That's a cool situation for you! All the horse without all the horse bills! That's sort of the way that Denali's lessor has it too. Although I pay the board and ride her too. I honestly have no idea how big she is,I've never measured her. She comes a little bit above my shoulder and I'm 6ft tall. Lol, I'm too cheap to buy a stick. I guess around 16 and I think that's big!

That last comment should have read "18 hand warmbloods," lol, not "18 warmbloods." I'm sure it's been many more than that!
And, Denali, Ruby is all the way in Chicago, so it's almost like having my own horse. The only bad part is he will be leaving me eventually, and then my little heart will break (like it always does when I have to say goodbye to a beloved animal).