Wednesday, October 7th was The Day. The night before, I had gone out to the barn and clucked around like a mother hen preparing a nest for her precious egg. Wingman's stall was selected, scrubbed down with bleach and water, and stocked with tons of floofy shavings, clean water buckets and feed bin, and a high-powered fan. I had managed to get him one of the coveted stalls that attaches to a big paddock (*score!*) and I de-cob-webbed and disinfected that stall like the OCD clean-freak that I am. Horse Stuff + Cleaning = My Personal Zen.

Around 11:00 am on the 7th, I stood in front of his immaculate stall and spied a two-horse trailer pulling up to the gate. Of course, my immediate reaction was to jump up and down and squeel like the little 12-year-old horse-crazy girl that I will always be. Thankfully, I managed to compse myself as the trailer rolled down the drive.

I believe that it was only Wingman's second trailer ride, his previous one being to a local schooling show that he had attended in September. And yet, Courtney said that he had trailered like a champ and that she had barely even felt him moving back there. Sure enough, she opened up the trailer and he was standing there all relaxed like he had been taking 6-hour highway trailer rides his whole life, and he backed off all calm and chillaxed.

Papers were signed, checks were written, and the big boy was led to his new home. Poor Courtney had to turn around and drive all the way back to Ocala in order to make her 5:00 lessons. I have to say, she was a pleasure to work with and she made the whole process very easy. If anyone in the Central Florida area is looking for a horse, a trainer, or a boarding barn, I highly recommend her! http://www.huntersedgeec.com/

So, now that the man was home, he had a new name. It seemed that Ruby was in the Halloween mood, because she had decided that his barn name would be Salem and his show name would be Witching Hour. I had been worried that he would be stressed out about the new barn, new neighbors, etc...I needn't have worried. 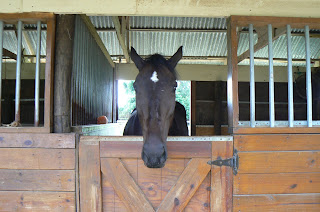 Salem chillin' in his new crib


At first, Salem stood at the opening to his paddock and whinnied to the horses in the neighboring pasture. He seemed confused, like, "What is this strange portal at the back wall of my stall?" It took him a whole two minutes to figure out that it wasn't an opening to a parallel universe. 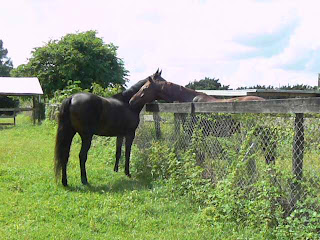 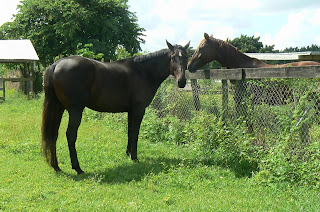 Stop embarassing me in front of my new friend 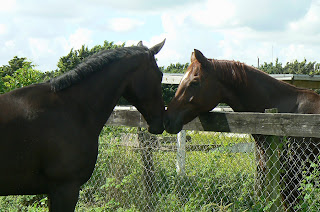 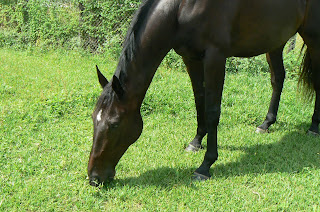 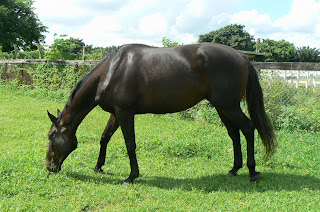 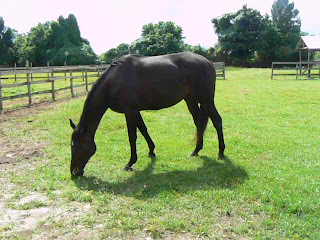 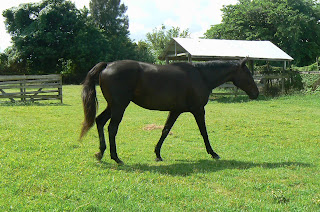 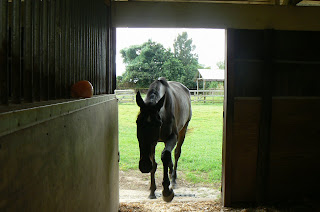 I've got this portal thing down 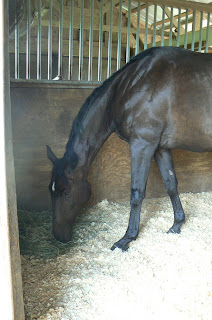 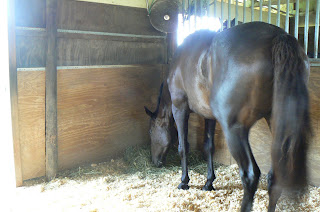 His new favorite spot, in the fan-corner 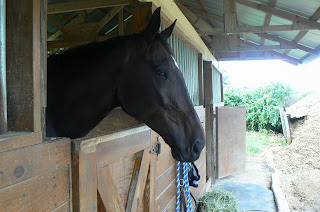 This place is alright, afterall 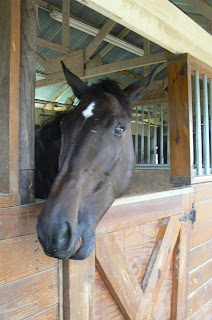 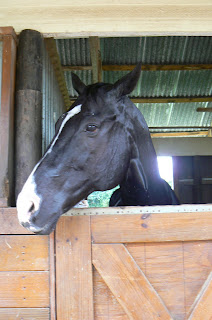 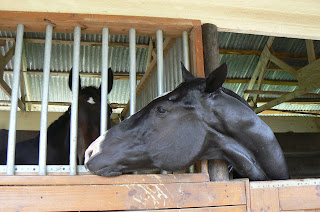 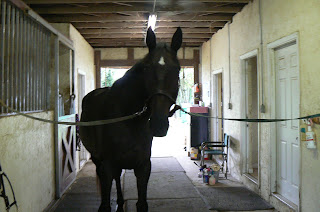 In the barn for a grooming 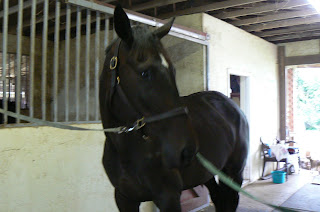 He looks calm enough, right? Well, about a minute later, he
pulled back and broke the cross-ties! I have no idea what
happened, like if Sid bit him or I hit a sensitive spot or
who-knows-what...but it was the calmest, slowest "freak-out"
I've ever seen! 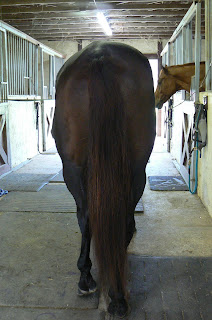 This was supposed to show his tail highlights, but
the lighting was too murky 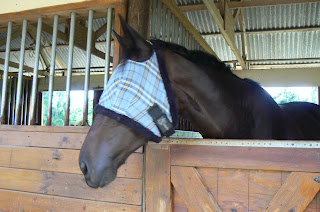 I thought the fly-mask might freak him out,
but he didn't bat an eyelash 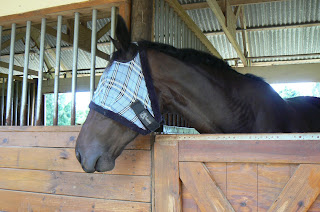 I love this pic because it looks like he has a popcorn kernel stuck in his teeth :-)

All in all, it was a fairly laid-back first day. I stayed with Salem until about 7:30, alternating between fussing over him and letting him settle in to his new home. He went on a stroll around the property, made a few new friends, had a nice shower, got fed a ton of hay, and was generally spoiled rotten by everyone. Ever the neurotic foster mother, I made sure he got doses of UlcerGuard, electrolytes, and probiotics (made sweeter with molasses) and carefully measured out his grain for breakfast the following morning. At the end of the day, he got a kiss on the nose and a couple of carrots and was tucked into bed a happy, content little pony.
Posted by Frizzle at 10:40 PM

Haha, we all need a neurotic foster mother. I LOVE his new name and am so excited you brought this gorgeous guy home. I think he will be a winner, he has "the look."

I love the name, it suits him. He looks like such a laid-back boy. By the way, he matches Lily! She has that fly mask in pink!

Yes, I am quite the overprotective foster mom! His new name is totally credited to his mom, although I was on the Voting and Selection Committee.
Anni, Salem's bestie Phantom also has the SmartPak plaid fly mask in pink (even though he's a boy, hahaha). I love those fly masks, they're cute and seemingy indestructable.