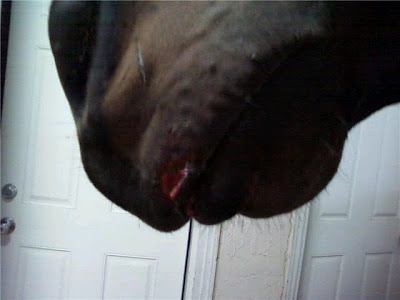 Yes, the inevitable happened on Monday. Unfortunately, I have not yet created a Horse Kevlar Body Armor Suit, nor does Salem live in a padded stall...so, yes, he got his First Semi-Serious Injury. I could tell something was wrong when I glanced in his stall and saw his hay strewn about and hardly eaten. He also seemed a bit spooky and out of sorts. Well, once I got him into the fully-lit barn, I took one look at his face and went, "Oooooohhh, fiddlesticks." His upper lip was split open, with a flap hanging down. It wasn't horribly deep, but it did not look good.


After a quick phone call to Ruby to let her know what was going on, I brought Salem over to Angel's (one of the workers) house to have a little "consult." It was so cute, I had Salem with me and he tried to follow me up the stairs! He had his front hooves on the second step before I managed to stop him. Even when injured, Salem is such a goofball! Anyways, in my best Spanish, I pointed to Salem's muzzle and said to Angel, "Mira. Es veterinario necessita?" Angel took one glance at Salem's lip and said, "Si, veteranario. Puntas (*while a making stitching motion*) es necessita." So, yes, he confirmed my fears. I put in a call (an emergency after-hours call, of course) to Dr. Franklin.
Within about fifteen minutes, the doc's truck pulled up to the barn. I actually hadn't seen him in almost a year -- the morning that my lovely boy Mac passed away from a horrible torsion colic. When I saw Dr. Franklin, it certainly put everything into perspective. Yes, I felt bad that Salem was in pain; but I knew that, in the grand scheme of things, it really wasn't so bad.
After giving Salem a sedative and injecting his lip with some numbing medication, Dr. Franklin started cleaning the wound. That was when I was very glad that I had called him -- in addition to the flap that I could see, there was another big split more to the inside of his lip. Dr. Franklin said that it could have been a bite from another horse or Salem could have caught it on something sharp. But, either way, he needed stitches.
I forgot to count how many stitches he did, but I'm thinking it was somewhere around ten or twelve. Salem was mostly a very good boy for the procedure. Every now and then, he would wiggle his upper lip a bit and mess up the stitches. He wasn't in pain or misbehaving -- he just had to show a little personality, as usual.
I had thought that Salem would need time off of work, and I was worried that the stitches would get in the way of his eating. Nope, Dr. Franklin actually said, "You're gonna let him have time off for this?" He said that it isn't anywhere near where the bit lies, so that shouldn't be a problem. And he also felt that it would not affect his eating at all. He told me to just clean the area with sterile saline solution every day. He gave Salem a tetanus shot and some IV antibiotics, and told me that he will be coming by over the next few days to give him more antibiotics. Salem's fully cleared for work and turn-out.
Unfortunately, I don't have any pics of the procedure, as I didn't have my camera with me. (The pic at the top of the post was taken with my crappy cell phone camera.) So, I brought my camera out today. Here's how the injury looks post-stitches (although you can't see all of them, as some of the stitches are more towards the inside of his lip): 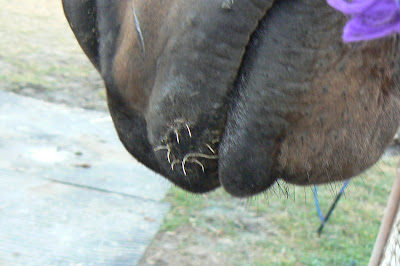 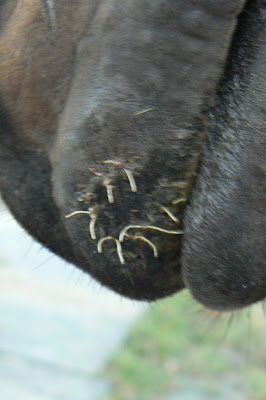 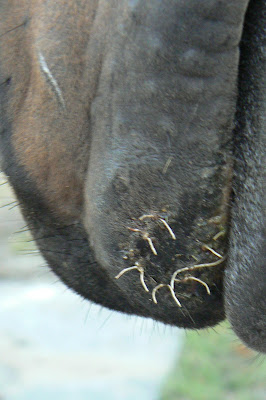 Even though Dr. Franklin had said I could ride today, I decided to just take it easy and give him a longeing/grazing/grooming day. Plus, it gave me some extra time (and an excuse) to do some Mental Hazard Training/Desensitization that is also known as Dress Up The Pony In Funny Outfits. 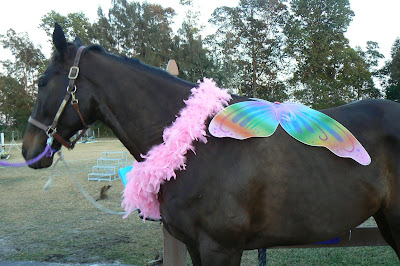 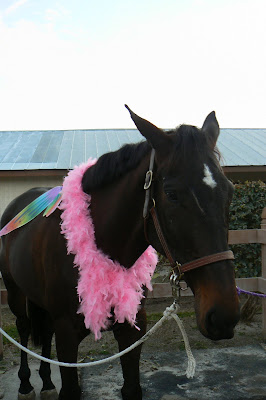 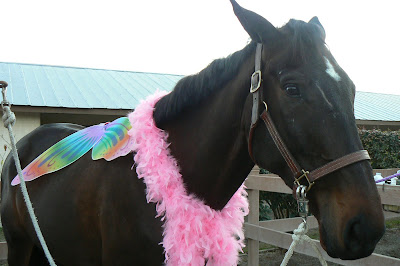 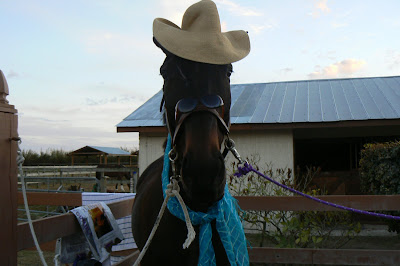 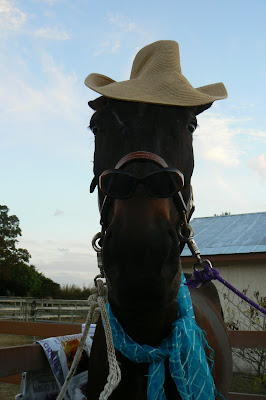 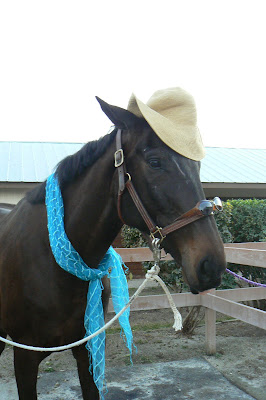 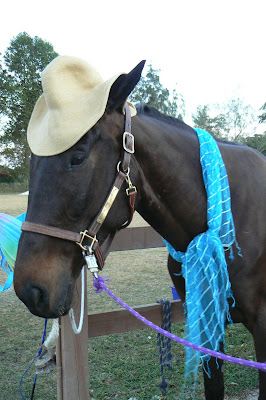 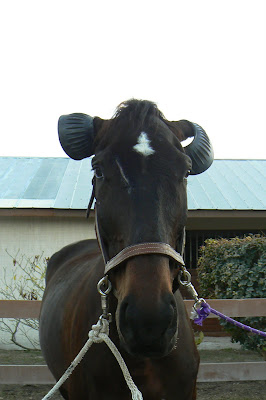 Princess Leia Salem (I have to admit, I got this idea from
the Eventing-a-Gogo blog) 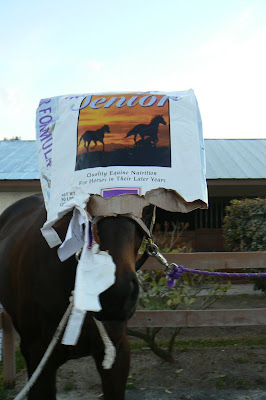 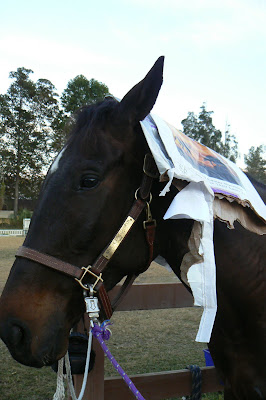 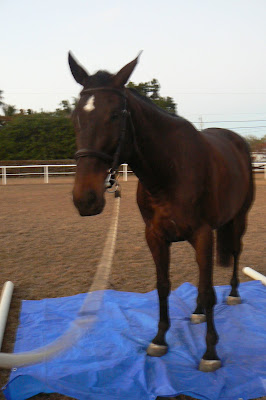 And I had to throw this one in to prove that Salem is fully tarp-trained
I'll keep everyone updated on his progress. Please keep your fingers crossed for us that he doesn't rub any of his stitches out!
Posted by Frizzle at 12:25 AM

Ha ha ha, I love his face in the pictures. "Mom, really? really, you need to take pictures?" I've never tried to dress Denali up, sounds like a fun idea.

Good luck keeping the stitches in! They look like whiskers at a weird angle. Denali decided to slash her leg as well, no stitches luckily!! I think the idea of Kevlar suits is great! Maybe you could make a bulk order, I'll go in on one with you! Yesterday I threatened bubble wrap.

Must be something in the air. Solo once again tried to rub the skin off his face yesterday, several nice scrapes to show for it. I keep my fingers crossed that he keeps wounds restricted to non-tack holding areas! Glad Salem is a-ok!

Yup, there definitely is something in the air -- one of my fellow boarders had to have her vet out Monday morning because her mare hurt her leg in turn-out. Luckily, everything's been minor, but it does seem like all of our equine friends are hell-bent on injruing themselves this week.
Denali, I seriously think the Kevlar would be a great idea. And maybe it could be padded with bubble-wrap?
Solo, glad your boy is alright, too. One of Salem's nicknames is Scarface because his head is always covered in scrapes and cuts. Fortunately, the little bugger seems completely unfazed by the sticthes (and they are all still in -- fingers crossed!).

Pony dress up! I love it. Let's have a contest.

This post and your sense was humor was JUST WHAT I NEEDED on this damp and depressing Sunday night! The pictures are a scream, and good training to boot! Are those bell boots on his ears?? hee hee I'm sorry about his lip and am thankful he will recover! I hope it wasn't a horse bite!

awww sweetheart!! Ouch on that lip injury!
The fashion show was too funny and his ears tell all! :)